The July de-escalation agreement for southern Syria concluded by Russia, the US and Jordan has generally ensured relative quiet on the ground. Yet while Jordan welcomed the return of the Syrian regime to the border, Israel fears the agreement ignores and implicitly accepts Iran’s design to fill the post-ISIS void and to establish a long-term presence in Syria which it can turn into a military front against Israel.

In light of the continued discussions about ensuring a ceasefire in Syria, BICOM has published a strategic assessment by Senior Visiting Fellow Brig. Gen. (res) Michael Herzog which evaluates Israeli and Jordanian concerns and outlines how Iran’s plan to establish a permanent military presence in Syria can be halted. 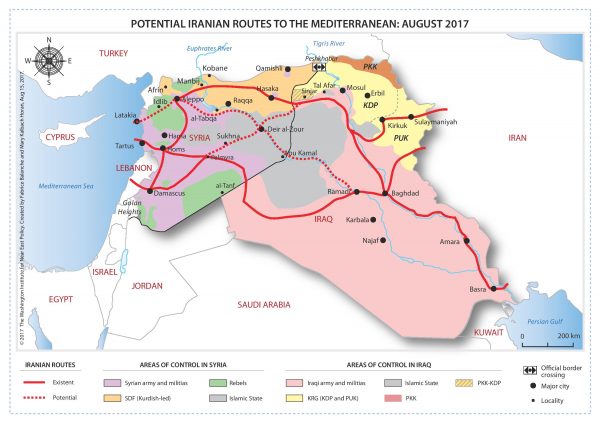 Iran has been working towards creating a land corridor stretching through Iraq and Syria to Lebanon, and plans on a long-term military deployment in Syria for itself and its proxies. The creation of such an Iranian sphere of direct influence in the heart of the Middle East would create additional tension with Israel and Jordan, and extend Iran’s malign influence towards Shiite populated parts of the Gulf such in Bahrain, Kuwait and eastern Saudi Arabia. The situation on the ground has also caused Israeli decision makers to believe that in a future war, Israel could face a unified Syrian and Lebanese theatre in a future conflict with Hezbollah.

While addressing this challenge requires a proactive American strategy, the Trump administration is seemingly narrowly focused on defeating ISIS. And although Russia has generally respected Israel’s red lines, it is doubtful that it will go far beyond that to stop the Iranians in Syria.

The US and the UK have an important role in strategically addressing this challenge. Rather than withdrawing their military assets in Syria following the defeat of ISIS, they should examine if and how they can be used to block Iran’s plans. The US and the UK should also seek to foster cooperation with willing regional partners – such as Saudi Arabia and Jordan – who are also concerned about Iran’s plans and support Israel and Jordan’s demand to significantly distance Iran and its proxies from their borders. In addition, they should seek common ground with Russia on limiting Iran’s military footprint in Syria and adopt a policy according any long-term political solution to Syria involves the evacuation of Iranian forces and all non-Syrian militias.

The full strategic assessment is available as a PDF below.