What happened: Just a week after the election, Israel is reaching another political impasse. 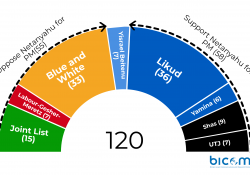 Context: Netanyahu’s right-wing ultra-Orthodox bloc is still stuck on 58 seats, three short of a parliamentary majority. Blue and White and the “anti-Netanyahu” bloc  has 62 seats but is divided over the question of accepting Joint (Arab) List support to form a government.

Looking ahead: As Israeli parties step up coalition talks, the official response to coronavirus is taking shape and it has been suggested that the national health emergency should now be managed by a national unity Government led by Netanyahu and Gantz.