Knesset expected to disperse next week, leading to another election

What happened: Last night Prime Minister Naftali Bennett and Foreign Minister Yair Lapid announced that they will bring a vote to disperse the Knesset, leading to new elections later this year.

Inside Yamina: Bennett’s own Yamina party has disintegrated. Already, as the government was sworn in a year ago, one rebel Amichai Chikli defected (and was later formally declared a rebel).

Reaction from the Opposition: Leader of the Opposition Netanyahu took credit for the government’s downfall and called it the “worst government in the history of the State of Israel”.

Next moves: The Knesset speaker and his deputies will meet today and decide when to introduce the bill to dissolve the Knesset, possibly tomorrow.

Looking ahead: Next week the Knesset is expected to vote to disperse the Knesset and Lapid will take over as interim prime minister. 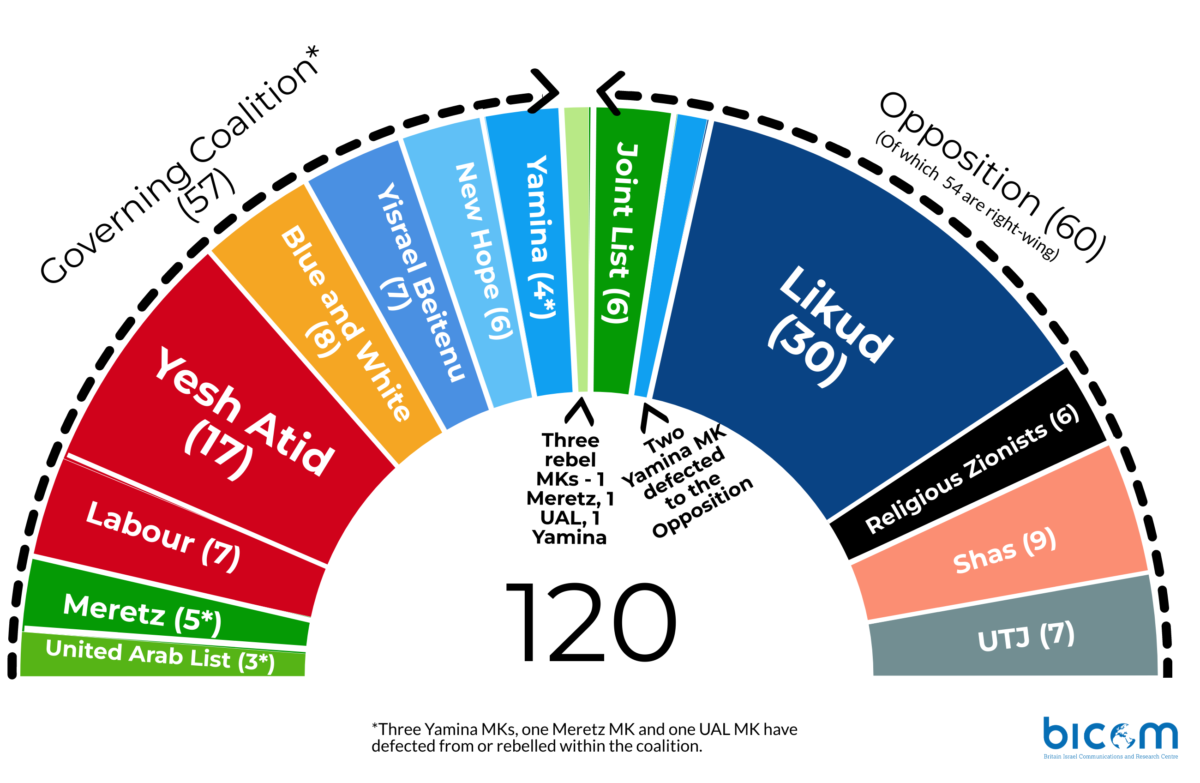 What the commentators are saying

Many Israeli commentators anticipate a difficult few months ahead. Sima Kadmon writes in Yediot Ahronot: “This morning, as we begin the run-up to a fifth election in the space of just three years, we all ought to bear in mind just what it is that lies in store for us in the months ahead. A country gripped by paralysis; ugly campaigns that will make life insufferable for us; billions of shekels that the state is going to spend on another election; and new attempts to form a government and a late state budget. Everyone who rejoiced yesterday to see the government of change fall should also bear in mind what it was that the government that wanted to produce change had fought against. They ought to bear in mind the venom machine that drowned everything it could.”

Nahum Barnea writes also in Yediot Ahronot that “the next four months are going to be brutal, malicious and nauseating. The parties in the pro-Netanyahu bloc are hungry for power. The parties in the outgoing coalition are going to fight for their place in power and for their very survival as well. Anyone with a weak stomach is advised to steer clear of politics for the next while.” Barnea goes on to say: Campaign warfare is likely to revolve around two other axes. The first is the Jews-versus-Arabs axis. The Likud will say that bringing an Arab party into the coalition was an unforgiveable sin, an act of treason against the homeland. The other bloc will counter that with Ben Gvir and Smotrich. Ultimately, it will all come down to a very simple question: who scares you more, Mansour Abbas or Itamar Ben Gvir? The second axis is Netanyahu. Contrary to most expectations, the year that has elapsed since the fourth election hasn’t diminished Netanyahu’s centrality to the political conversation in the least. His name works well on both sides: Netanyahu energises and gets out the vote in his own bloc and in the bloc that repudiates him.”

Ben Caspit warns in Maariv that the Israeli parliament has been in this position before: “A word of warning: it’s not over until it’s over. We’ve been in a similar scenario once before with Netanyahu, when the Knesset began to pass the bill to move up elections, which had passed in a preliminary vote, but then Shaul Mofaz broke and made the biggest mistake of his career and jumped on the Netanyahu government bandwagon. He never survived that and was buried, like many before and after him, in the cemetery of those who trusted Netanyahu and whose (political) grave is unknown.”

On a similar line, Matti Tuchfeld argues in Israel Hayom: “Naftali Bennett’s agreement with Yair Lapid blocks any possibility of him being part of an initiative to form a right-wing government headed by Binyamin Netanyahu in the current Knesset. The chances of him reneging on his promise to Lapid that the latter will become prime minister of the transitional government next week are slim.  That doesn’t mean that other members of Yamina and New Hope are going to feel the same sense of commitment and won’t try to form such a government. Ayelet Shaked has made it clear that she intends to try. If Gideon Saar and/or others in his party get on board, then that option is viable.”

Also in Yediot, Nadav Eyal contends that “none of the eulogies and analyses that we are all going to read and hear over the course of the next few days will be able to hide the self-evident truth: yesterday’s decision was unavoidable. It was unavoidable from the moment the government lost its majority in the Knesset with Coalition Chairwoman Idit Silman’s decision to quit, which was followed by the other last-gasp convulsions, courtesy of Orbach and Zoabi.” Like Barnea, Eyal believes the upcoming elections will concentrate around Netanyahu: “The upcoming election will focus once again on Netanyahu, last night’s big winner. Despite his age, despite his trial, he fought a powerful and, as usual, unbridled fight from the opposition, proving once again that the heat of battle infuses him with young blood. Likud MKs say that he has been talking about the possibility of an historic change of the kind that Israel’s hasn’t seen since 1977 and hopes of winning even 40 seats. Facing that wave, the incoming prime minister, Yair Lapid, the undisputed leader of the centre-left bloc, will fight an intelligent fight and will try to chip away at the advantage that the right-wing bloc currently has. A lot will depend on the Arab voters, who currently appear to be indifferent. That indifference could help produce a stable Netanyahu government. If they act, however, they will be able to create a blocking majority that will prevent Netanyahu from becoming prime minister.”

Despite the major domestic political challenges that the Bennett-Lapid government has faced, in the field of foreign policy it can boast significant achievements, especially in the improved diplomatic relations with many of its neighbours. Read our latest briefing, Foreign Policy of the Bennett-Lapid Government: One Year On, on the foreign policy achievements of this government.

In our latest issue in Fathom, Ron Gerlitz argues that the Jewish-Arab political experiment has not failed, despite the current crisis of the Bennett-Lapid government. Meanwhile, Jack Omer-Jackaman argues that leftists like himself will look back on the year-long coalition as a blessed interregnum.

For in-depth context on the state of the Arab parties going into this election cycle, read two essays in Fathom by Calev Ben-Dor on Ra’am leader Mansour Abbas and Joint List leader Ayman Odeh.