Category: Israel and the UK

On 1 March, Buckingham Palace announced that Prince William, the Duke of Cambridge, will this Summer embark on the first official visit to Israel and the West Bank by a member of the Royal Family.

BICOM’s research team has produced a briefing outlining the Prince’s potential itinerary and the history of Royal trips to the Holy Land. 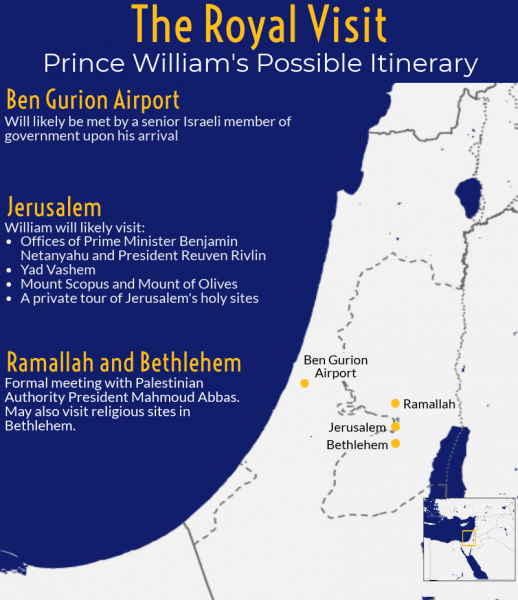 While the itinerary for the trip has not been finalised, it is likely it could include:

He may also arrange an event related to civil society or coexistence.

In addition, the Prince may visit some holy sites in Jerusalem – such as the Anglican St George’s Cathedral, which was established in 1899 – and other historic religious sites located in the Old City, although these would likely be under the framework of a “private tour”. During his time in the West Bank, the Prince will have a formal meeting with Palestinian Authority President Mahmoud Abbas and is likely to visit Bethlehem, potentially visiting the Church of the Nativity.

Cover image used with permission of the Royal Collection Trust, © Her Majesty Queen Elizabeth II 2018. Prince Albert Edward and his party at the ancient city of Capernaum on the Sea of Galilee in 1862.

The full paper is available to download via the link below.