Israeli elections 9 April 2019. On this page you can find BICOM’s regular poll of polls, campaign updates and analysis of the parties and politicians.

Our January 2019 Israeli election briefing examined the reasons for early elections; identifies key issues on which the election will be fought; analyses voting trends over the last decade; and highlights events that could shake up the election and the future formation of the governing coalition.

Read our break down of all the Parties, Politicians and Policies

Our Israeli Elections Bulletin can be found here

The Next Israeli Government?*

Benjamin Netanyahu is set to continue as Israel’s Prime Minister after final results show that his Likud has a clear path to form a 65 seat coalition with five other parties.

The New Right – which was under the electoral threshold by only a few thousand votes – called for a recount of the 200,000 double envelope votes which include those of soldiers, hospital patients and overseas diplomats. Gesher and Zehut failed to get over the threshold and have not won any seats

Number of Seats Based on Aggregated Polls*

Projected Seats by Bloc Over Time

The importance of blocs: whilst personality is increasingly more important than policy, parties are typically labelled as being part of one of five blocs – right-wing, left-wing, centre, ultra-Orthodox, and Arab – based on their positions on issues of national security and / or religion and state. At the same time, several parties avoid these labels and there is often a fluidity between the blocs themselves. For more in-depth analysis about the blocs, be sure to read our Israel Elections briefing.

Getting to 61 – possible governing coalitions*

*According to numbers based on aggregated polling, March 22 – April 5

Where do the parties stand on major political issues?

Blue White leader Benny Gantz is significant because of the strength of his individual polling numbers, which consistently show the former IDF Chief of Staff closer to the Prime Minister in head to head polling than any other candidate since Netanyahu took office in 2009. Gantz is assumed to be broadly centrist and his security credentials could make him a more credible prime ministerial candidate than other Netanyahu rivals, and draw away some of Likud’s more centrist voters.

Brief History of IDF Chiefs of Staff in Politics

Listen to our latest podcast on the upcoming elections 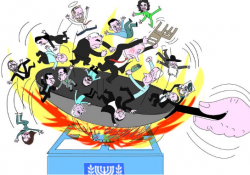 April 5 – This Haaretz cartoon shows all the parties fighting in a frying pan. As it gets hotter, some of the smaller parties, such as Gesher, Raam-Balad, Yisrael Beitenu and Kulanu (all currently near the electoral threshold of 3.25%) may be falling out 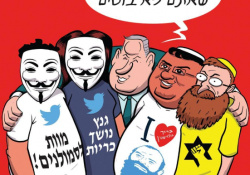 April 2 – In this Maariv cartoon Netanyahu is seen hugging four people with radical, homophobic and racist opinions saying ‘Atleast you are not bots’. This week the Prime Minister responded to a study claiming an army of internet bots were promoting Likud material by finding one individual behind some offensive tweets and doing a press conference with him 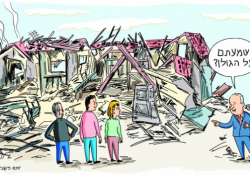 March 27 – Yediot Ahronot’s cartoon shows Netanyahu’s trip to Washington and Trump recognising sovereignty over the Golan was overshadowed by a missile attack from Gaza on a house in central Israel. In this cartoon, Netanyahu tries to change the conversation back to his diplomatic success 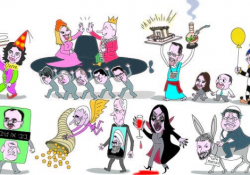 March 22 – To mark the festival of Purim, on which Jews dress up, a Haaretz cartoon displays all the major political leaders. Netanyahu and his wife and held aloft a submarine by Likud MKs. Moshe Feiglin, the leader of the right-wing libertarian Zehut party, which may be the surprise of the election holds aloft the Temple (which he’d like rebuilt) and a marijuana bong which he’d like to legalise. Meanwhile, Labour and Meretz leaders are dressed as clowns, Finance Minister Kahlon is throwing out money, Ahmad Tibi has a card with Netanyahu’s slogan ‘its Bibi or Tibi’ and Benny Gantz wears a phone with Iran’s Supreme Leader on it 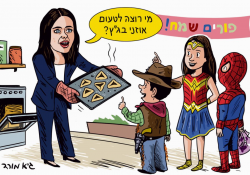 March 19 – From Yediot Ahronot: As the festival of Purim approaches, on which Jews eat pastries known as ‘Haman ears’ – after the villain of the story – Justice Minister Ayelet Shaked is seen offering children ‘Bagatz (Supreme Court) ears’. Following the court’s decision to disqualify Jewish Power leader Michael Ben Ari for incitement to racism (but allow Arab party Balad-Raam to run) many on the right have been critical of the court. Shaked announced her intention to make drastic changes to the judicial process. 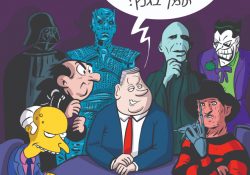 March 18 – From Maariv: The cartoon shows Netanyahu sitting with a host of caricature bad guys to discuss who they should decide will be the next one to say he supports Blue White party leader Benny Gantz. Netanyahu’s so-called gevalt campaign (Yiddish for alarm) has seen him claim that the Iranian regime publicly supports Gantz’s candidacy. He has also argued that Blue White is weak and soft on Hamas. 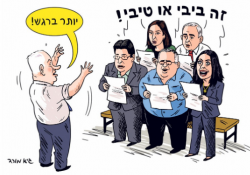 March 4: From Yediot Ahronot – Netanyahu implores “more feeling” as his obedient MKs sing ‘it’s Bibi or Tibi’ One of Bibi’s main arguments has been that Blue White will form a coalition with the Arab parties, one of which is jointly headed by Ahmed Tibi of Ta’al. 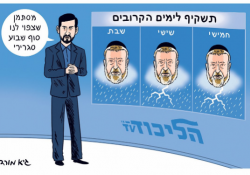 February 28: From Yediot Ahronot – Likud TV presenting the weather report with Attorney Avichai Mandelblit’s face on it today, tomorrow and Saturday with the presenter warning we’re in for stormy inclement weather. The AG’s announcement to indict Netanyahu is the start of a long legal process. The PM does not have to resign and he can stand and become the next PM. But politically it will shake up the election, could reduce his support and make it harder for Netanyahu to form a coalition 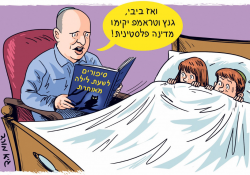 February 25: From Yediot Ahronot –  New Right leader Naftali Bennett reading a scary bedtime story to children. ‘Then Bibi, Gantz and Trump will establish a Palestinian state’. Bennett claimed that Netanyahu will agree to Trump’s plan for Israeli-Palestinian talks, due to be published after the elections. Bibi and Bennett are fighting a bitter battle to win right wing votes. 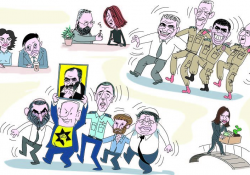 February 22: From Haaretz – the cartoon shows the winners and losers of the last few days. Yair Lapid and 3 former IDF Chiefs of Staff rejoice after forming their new party while Netanyahu and leaders of a far right party hold a photo of Meir Kahane, whose Kach party is illegal in Israel and is an illegal terrorist organisation in the US and Europe. Labour and Meretz failed to merge which might harm Meretz prospects, Ehud Barak and Tzipi Livni – who left politics – share a joint (Barak has an interest in a medical marijuana company); and Gesher’s leader Orly Levy – whose support has decreased, is packing her bags. 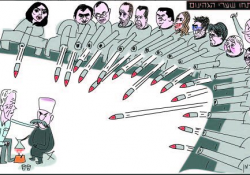 January 15: From Haaretz – As Benny Gantz breaks his silence and says the the Nation State Law should be amended to be more inclusive to the Druze, Netanyahu’s Likud party ‘open up the gates of hell’ 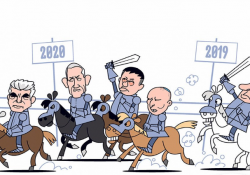 January 10: An insightful cartoon in Yediot Ahronot shows Naftali Bennett, Benny Gantz, Yair Lapid & Avi Gabbai battling it out for 2020 while Netanyahu languishes back in 2019. The article by Sima Kadmon argues that Israeli politicians are increasingly working towards two assumptions. First, that Netanyahu will win the elections and second, that he’ll be forced out soon afterwards. 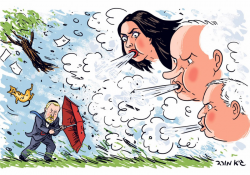 January 7: From Yediot Ahronot – Netanyahu, Culture Minister Miri Regev and Coalition Chairman David Amsalem attack Attorney General Avichai Mandelblit. Mandelblit is likely to announce whether or not the PM will be indicted before April elections. Likud members are pressuring him not to do so, fearing it will harm Netanyahu’s election prospects 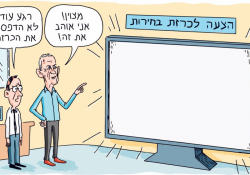 January 6: From Yediot Ahronot – Benny Gantz studying an empty white board on suggestions for election posters. Gantz says ‘excellent – I love it’. And aide replies ‘hold on – we haven’t printed the poster yet’. 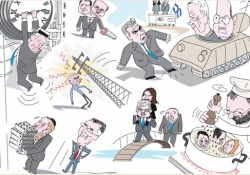 December 28: From Haaretz – the Attorney General carries files for the Prime Minister’s investigations watched by Gidon Saar, a likely challenger to Netanyahu within Likud, and Netanyahu clings on for dear life. Finance Minister Kahlon gets injured by high electricity prices. Aymen Odeh and Ahmed Tibi of the Joint Arab List consider splitting. Yesh Atid leader Lapid is threatened by a potential merger between new parties led by former IDF Chiefs of Staff Gantz and Yaalon. Orly Levy who formed her own party Gesher – just as her dad did in the 1990s – is leaving her former party head, Avigdor Lieberman, behind. Jewish Home leaders stand on the roof of a settlement outpost. And Ehud Barak cooks a stew including Zionist Union leaders Gabbay & Livni. 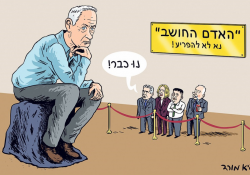 December 27: From Yediot Ahronot – on the wall a plaque reads: “The Thinking Man – please do not disturb” and depicts former Chief of Staff Benny Gantz – whose entry into the race could shake up the Israeli elections – while current Prime Minister Benjamin Netanyahu, Yair Lapid, Tzipi Livni & Avi Gabbay look on and say ‘Hurry up already!’ 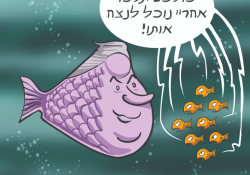 December 27: From Marriv – the the small fish – representing left & centre-left parties – argue over who should lead the anti-Bibi bloc. The bubble text reads: ‘if you all follow me we can beat him’. Meanwhile, a much larger Netanyahu shaped fish looks on.

Key facts about the Israeli electorate and Knesset