A year ago, Palestinian rioters in East Jerusalem clashed with Israeli police and sparked a wave of Palestinian attacks that have resulted in 42 people being killed in Israel and 577 wounded. 163 Palestinian attackers have been arrested and 196 killed. A year ago analysts were debating whether or not this was a third intifada. But a full-scale Palestinian uprising – with a mass mobilisation of the public and support of the Palestinian leadership – never happened. Despite brutal attacks, the trauma on the Israeli side has not been deep enough to compel the Government and security forces to escalate military operations and alter the modus vivendi of Israeli-Palestinian relations. Attacks have continued for 12 months with varying levels of intensity. An initial surge of stabbing attacks was overtaken by a spate of shootings. But despite the ongoing violence, Israeli-Palestinian relations have largely remained stable.

Why is this happening?
Extensive research into the motivations of Palestinian attackers has identified two clear themes in material read and shared by them on social media prior to their violent acts. The first theme was the need to defend the al Aqsa mosque in Jerusalem in the face of accusations that Israel was attempting to change the status quo in the Muslim holy sites, a charge that Israel has refuted. The second theme was the call to avenge the deaths of those killed by Israel subsequently carrying out attacks. Pictures of young Palestinians shot by Israeli soldiers are shared widely on social media without reference to the violent acts they were committing, or attempting to commit, before their deaths. Social media has played a critical role facilitating a fast process of radicalisation. Organisations such as Hamas have sophisticated social media operations deployed with significant effect to target young people. The wider context of ISIS success and their own well-honed social media output has helped to normalise and glorify martyrdom and violence.

Who are the perpetrators and what operational challenge do they pose?
The profile of Palestinian attackers is quite unique. Most of the attackers have been young, often teenagers, with no prior record of involvement or affiliation with violent terrorist organisations. When the first period of violence began, Israeli security agencies struggled. Unable to implement the established strategy of targeting known activists to prevent attacks, they had to rethink. Over time Israeli police have developed an entirely new way of working. Intelligence gathering and surveillance moved online with intensive monitoring of Facebook and social media activity. They developed a bespoke algorithm to identify young people suspected of being close to launching an attack and visited their homes to question or detain them.

Stabbing attacks represent very significant operational challenges. Attacks involving automatic firearms and explosives require equipment and skills. Security agencies have time and opportunity to detect and prevent them. An attack with a kitchen knife can be prepared in seconds and executed entirely alone. An illegal firearms market can be disrupted, the market in kitchen knives is open, legal and impractical to disrupt. In addition, there have been 47 incidents of cars being driven into people adding a further challenge in identifying when a law-abiding driver morphs into a potential terrorist.

Since May there has been a marked increase in shooting incidents. The IDF and Shin Bet have launched extensive operations to close down illegal weapons workshops in the West Bank producing replicas of Carl Gustav sub machine guns that were used in the June Sarona Market shooting attack and can be bought for as little as £360. Last week a 39 year old man from East Jerusalem fired an M-16 from a car killing two Israelis. He had a significant amount of ammunition in his possession and the incident highlights that on occasion determined assailants are able to procure top quality weapons.

What is Hamas’s role?
Despite relative quiet on the Israel-Gaza border, Hamas is working hard to activate operatives on the West Bank and use social media material to radicalise young Palestinians into committing terrorist acts. Israeli security agencies have disrupted a number of plots and attempts but Hamas has claimed responsibility or involvement in some of the most deadly attacks including the June Sarona market shootings in Tel Aviv, the attempted Jerusalem bus bomb in April and the Jerusalem shooting in October. Hamas has stated its intent to facilitate large-scale attacks that will necessitate a heavy response from Israel and put severe strain on the Palestinian Authority. So far that hasn’t happened and it isn’t clear if this is due to operational success on the part of security services or a problem activating terror cells in the West Bank and access to the right equipment.

What are the Palestinian security forces doing?
The untold success story of the last year is the work of the Palestinian security forces preventing attacks and carrying out arrests. They have worked closely with the IDF and Israeli security agencies during a period of high tension and, apart from less than 10 incidents Palestinian officers have not been involved in attacks on Israelis. Palestinian forces went through a period of rebuilding and reform after the second intifada and their current performance has been assisted by the on-going programme of leadership training provided by the US and UK. Security cooperation with Israel isn’t popular among Palestinians and President Abbas has threatened to end it, even though Israeli and Palestinian forces share a strong mutual desire to tackle Hamas and undermine its operations.

How have the Palestinian leadership responded?
The Palestinian Authority is in a tight spot politically. Aid has decreased and the Palestinian economy is weak leading to less funding for key institutions and services. President Abbas has scored no major diplomatic achievements, his legitimacy is waning as supporters and opponents are manoeuvring in anticipation of his resignation or retirement. Abbas’s response has been a fudge. He has echoed claims that Israel has changed the status quo on the Temple Mount and repeated inflammatory rhetoric that finds the presence of Jews in the area to be abhorrent. He has accused Israel of extra judicial executions and allowed Fatah and PA institutions to instil a culture that celebrates and rewards ‘martyrdom’ in particular by continuing to provide financial support to convicted attackers and relatives of dead attackers. His security forces are working closely with Israel as he repeatedly threatens put a stop to it. If Abbas leaves the scene his successor would seek to establish a distinct identity and may limit security cooperation with Israel, and thus impair efforts to deter Hamas and prevent further attacks.

What is the Israeli Government response?
Prime Minister Netanyahu has talked tough on terror but has largely followed the advice of the IDF and approved a cautious policy of limited, targeted counter measures to prevent terrorist attacks. The appointment of Avigdor Lieberman as Defence Minister appeared to signal a change of approach but despite vague pronouncements about a carrot and stick strategy, very little has changed. The IDF have implemented measures to ease tensions by increasing work permits for Palestinians and limiting counter terrorist operations in Area A. Netanyahu has repeatedly accused Abbas and his officials of inciting violence against Israelis and condoning attacks rather than publicly condemning them. But Netanyahu has repeatedly offered to meet Abbas for negotiations without preconditions.

Conclusion
The current situation has defied expectations. No one could have predicted that the attacks would continue for a year without a more serious knock on effect. Instead there is a curious stability in Israel and the Palestinian Authority. There is no likelihood that Israel and the Palestinians will restart serious negotiations over final status issues. The Palestinian Authority is weak and has done little to improve the daily lives of Palestinians. There is disappointment and anger with no outlet for expression as even municipal elections have been postponed. But there has been no widespread revolt against the Palestinian Authority and no full scale prolonged attacks against Israeli forces by large groups of Palestinians. The Israeli response has been cautious and limited. Despite tough talk from both leaders, beneath the surface there is a deep truth of shared endeavour. They are both constrained by their political opponents and need each other to fight Hamas. They know their people are in no mood for bold steps into the unknown and understand the fragility of the status quo. Above all, they recognise the overwhelming desire for stability and security by both Israelis and Palestinians. Their actions are carefully calibrated to maintain that at all costs. 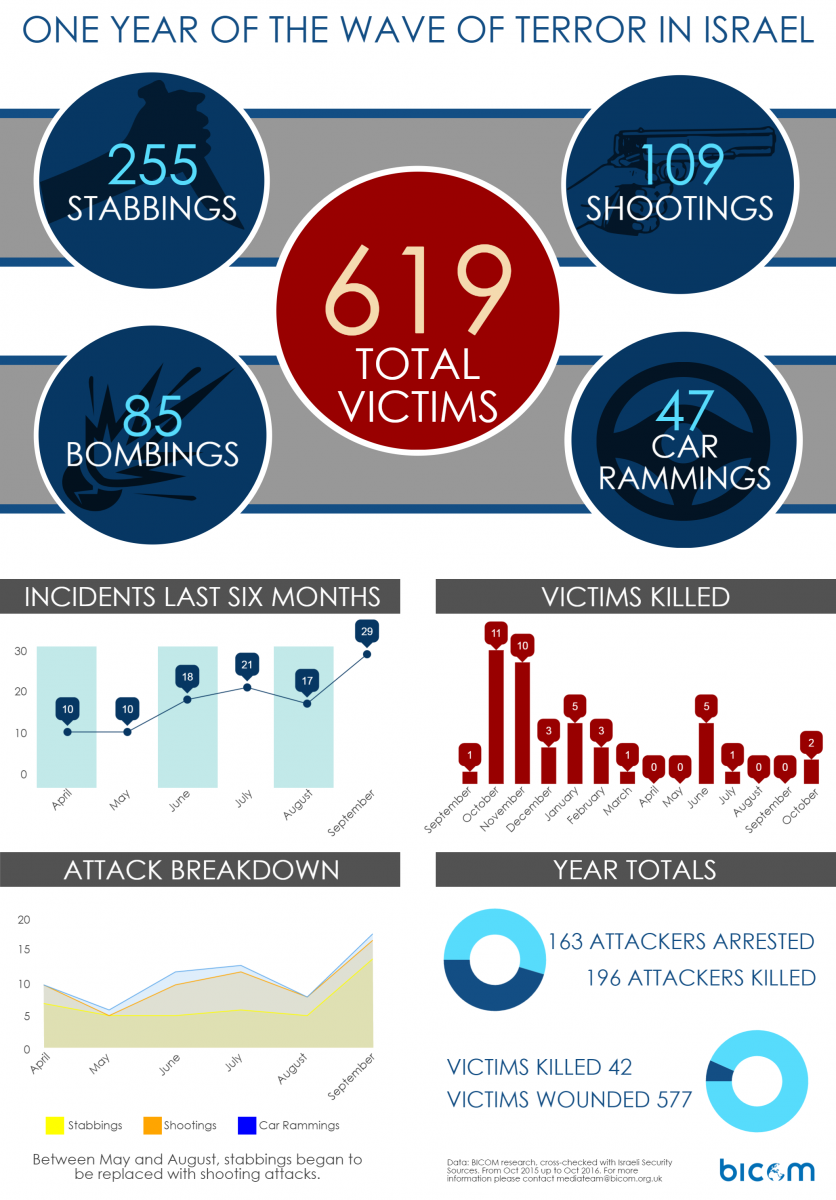 James Sorene is CEO of BICOM. This article originally appeared on the Times of Israel.