To truly comprehend the long-term transformation in Britain-Israel relations, consider one idea. Decades ago, the British Government, rightly or wrongly, viewed overt intimate relations with Israel as a problem for British interests in the Middle East. In 2020, overt, close relations with Israel are part of the solution to most of the problems Britain faces in the Middle East.

When Prince Charles arrives in Israel this week for his first ever official visit, he will celebrate a broad and deep bilateral partnership that encompasses trade, healthcare, tech, innovation, research, counterterrorism, defence and cybersecurity.

Britain’s historic alliance with Arab countries, once a source of tension and suspicion in its relations with Israel, now complements it. Israeli links with Sunni Arab states are evolving fast and the UK is simultaneously looking to the Gulf as a key area to increase trade and investment after it leaves the EU. It was no coincidence that Oman, one of Britain’s closest allies in the region, hosted Israel’s Prime Minister Benjamin Netanyahu in 2019 for the first ever visit by an Israeli leader to a Gulf State.

There are many reasons for the revolutionary Israeli-Arab diplomatic detente, the mutual threat from Iran and the ongoing danger of salafi jihadist terrorism are two major themes, but for Britain it has undoubtedly aided the rapidly deepening bilateral relationship with Israel as explored in a new paper published by BICOM this week.

Trade between Britain and Israel is booming, expanding by 72 per cent in just 6 years between 2012 and 2018. Exports from Israel to the UK increased by 21 per cent in the same period, driven by increasing demand for generic drugs in the NHS from the Israeli company Teva that saves UK taxpayers billions of pounds. British exports to Israel have increased by 136 per cent because of a staggering $3.8bn of oil exports in 2018, an increase of 14,000 per cent since 2012. 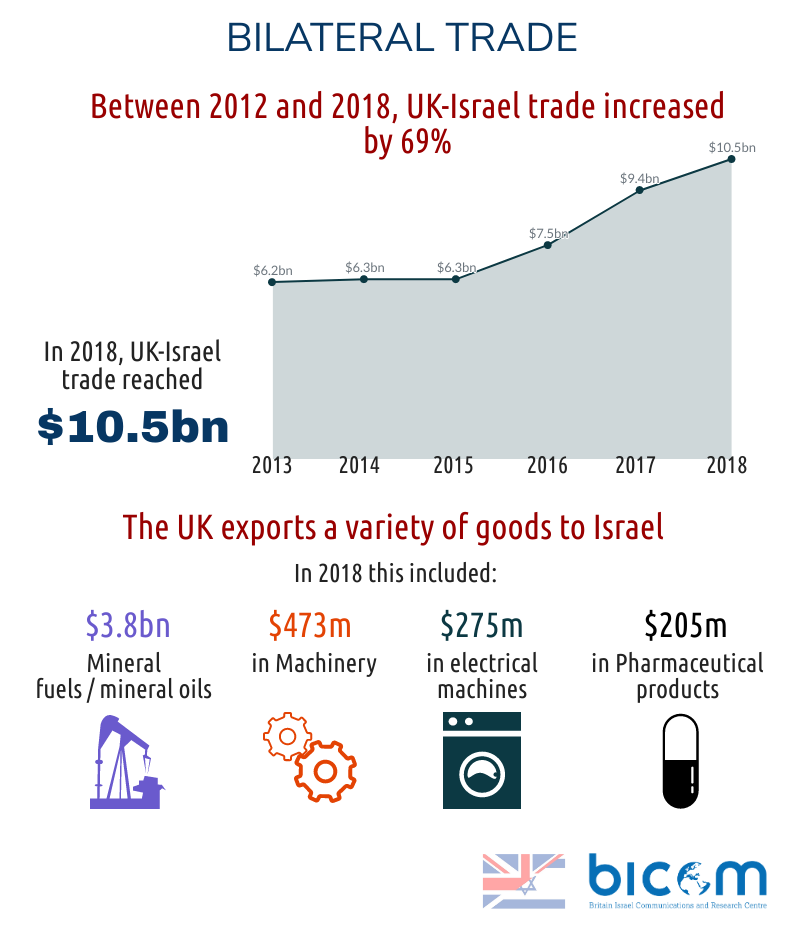 But beneath the big numbers are unique partnerships in the cutting-edge industries of fintech, cybersecurity and digital healthcare. Israeli companies provide many of the security systems required to protect the City of London from financial fraud and are playing a leading role in new NHS treatment innovations and digital health records.

The UK Israel tech hub based in the British Embassy, once a small experimental unit set up to build business partnerships, has brokered 175 British-Israeli joint ventures and become a model to be rolled out in more UK embassies around the world. 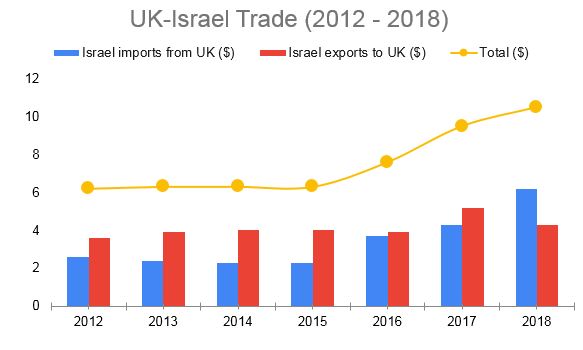 Israel and Britain are key partners protecting their critical national infrastructure from cyber-attacks. Israel’s Mossad and MI6 have a long-standing and close relationship based on similar terrorist threats and mutual respect for professional capability. It was MI6 that first alerted Israel to the possibility that the Syrian regime might be building a facility to produce nuclear weapons. When the Mossad uncovered evidence that the facility existed, Prime Minister Ehud Olmert called Prime Minister Gordon Brown to brief him about the Israeli operation to bomb the reactor and subsequently sent a team to London to share details of exactly what Israel had destroyed.

The special relationship between the British and Israeli armed forces was nurtured by Israel’s pioneering military leaders who had either served as British officers during the Second World War or were trained in counter insurgency by Orde Wingate in the 1930’s. Today their partnership is bolstered by bitter mutual experience fighting terrorist militias and their shared deployment of the F-35 in combat.

There are however two current sources of diplomatic tension. On Iran, both countries agree on the problem – stopping Iran building a nuclear weapon – they disagree on the solution. The UK is sticking with the 2015 nuclear agreement, despite triggering the dispute mechanism with France and Germany to protest Iranian violations of the deal. Prime Minister Netanyahu believes the deal was flawed from the start due to weak monitoring, generous sunset clauses and a failure to address the linked issues of Iran’s missile programme and support for terrorist and military groups that destabilise states across the Middle East. Prime Minister Johnson’s call last week for the US to present a ‘Trump deal’ for Iran suggests a potential convergence with the Israeli view that the 2015 deal should be replaced with a much tougher version. Britain’s decision to ban the whole of Hezbollah as a terrorist organisation in February 2019 shows the UK is prepared to crack down on dangerous Iranian proxies and its tough talk at the UN against Iran’s ballistic missile programme could even lead to tough action. 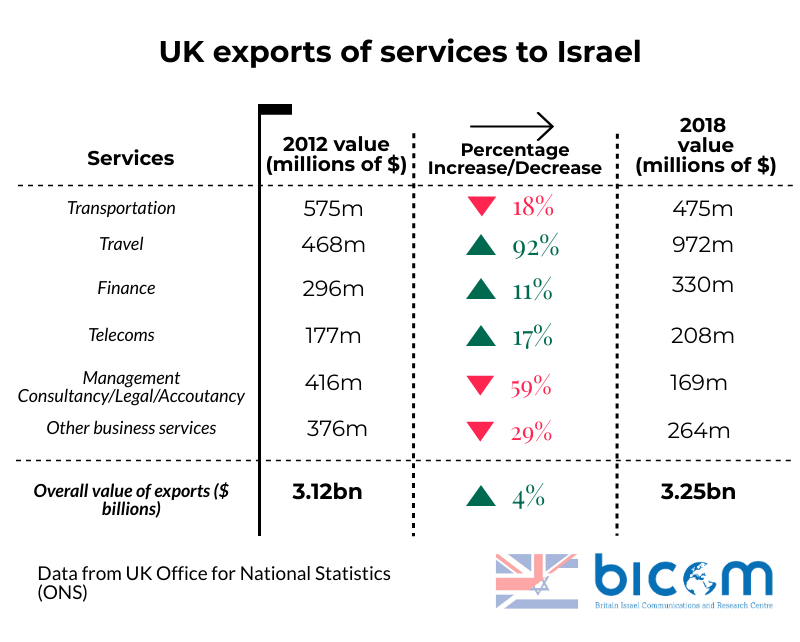 Exports from the UK to Israel are also on the up. (BICOM/Jewish News)

The UK is fully committed to a comprehensive resolution of the Israeli-Palestinian conflict via a negotiated deal that creates a Palestinian State with Jerusalem as a shared capital, Israeli withdrawal to the pre-67 lines (with agreed land swaps) and an equitable deal for Palestinian refugees. The UK is a major aid donor to UNWRA and the Palestinian Authority and opposes any Israeli action that it believes puts the creation of a Palestinian State in jeopardy. Britain has expressed alarm at promises by Benjamin Netanyahu to apply Israeli sovereignty to all Israeli settlements in the West Bank and has become increasingly critical of new construction in Israeli settlements.

Ultimately, the UK views Israel, much like itself, as a like-minded Western orientated democracy with strong links to Europe but a deep alliance with the United States. As Britain redesigns its network of global relationships after leaving the EU, its strategic partnership with Israel – an innovative export driven economy trading with Europe and Asia – could become increasingly important in the years ahead.

This article was originally published in The Jewish News