UK politics is highly volatile, the Brexit vote and ensuing stalemate has unleashed a whirlwind of identity politics, but the curious thing about the results of our annual poll of UK attitudes to Israel and the Middle East is how little has changed.

This despite Jeremy Corbyn being repeatedly accused of antisemitism, the Equality and Human Rights Commission investigating the Labour party for anti-Jewish racism and Labour party conference being transformed into the AGM of the Palestine Solidarity Campaign. 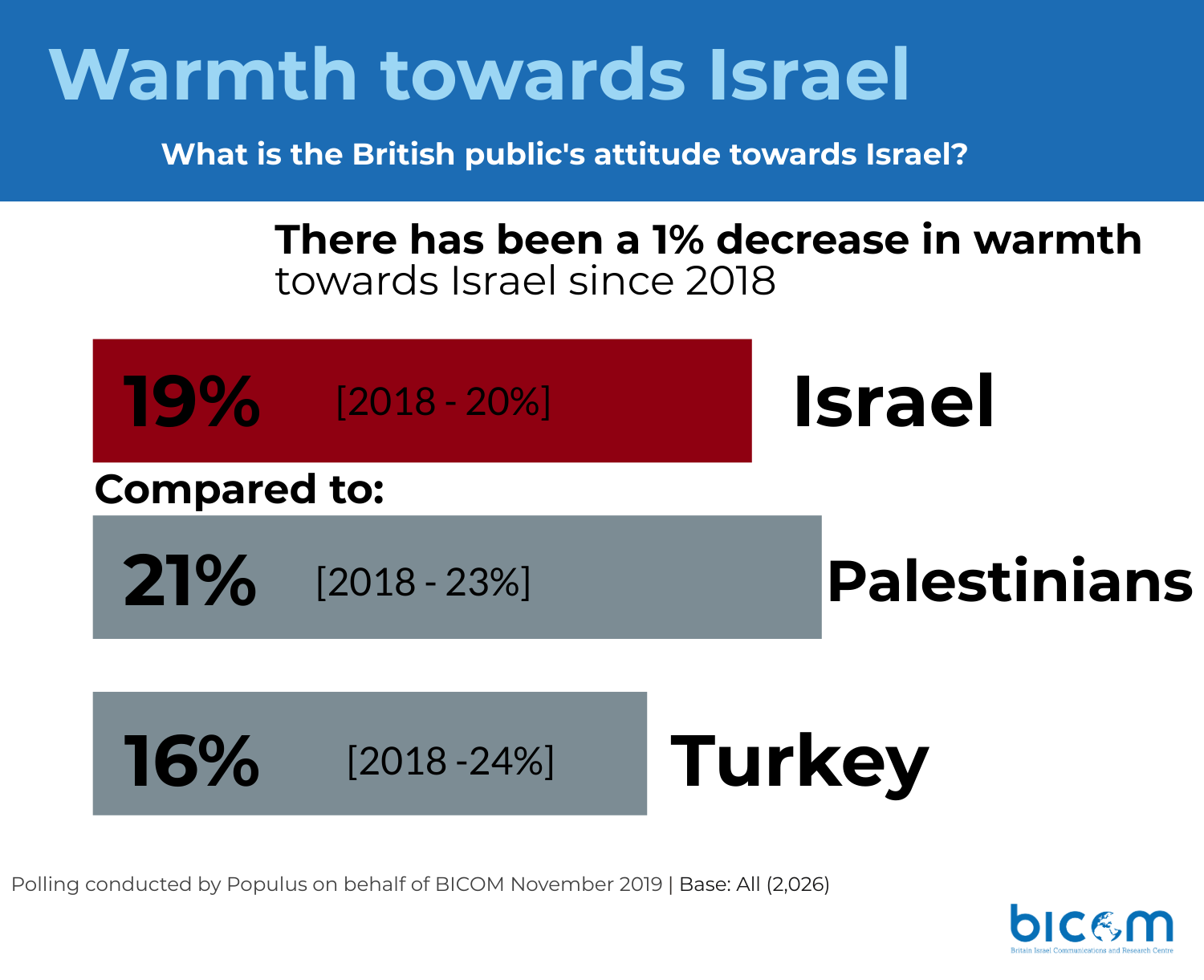 On our key measure of ‘warmth’ towards states and actors in the region, Israel and the Palestinians each receive about 20 per cent. This is not an either / or question. Respondents are invited to express warmth towards a list of people and countries, not to say which ones they prefer over others. This year 19 per cent feel warm towards Israel, a decrease of one percentage point compared to 2018. Twenty-one per cent feel warm towards the Palestinians, a decrease of two percentage points since 2018. These figures have been consistent for a decade.

The big change in this year’s survey is warmth towards Turkey, which has decreased significantly from 24 per cent in 2018 to 16 per cent. The survey was carried out between 1 and 3 November so Turkey’s invasion of Northern Syria may have had an impact. 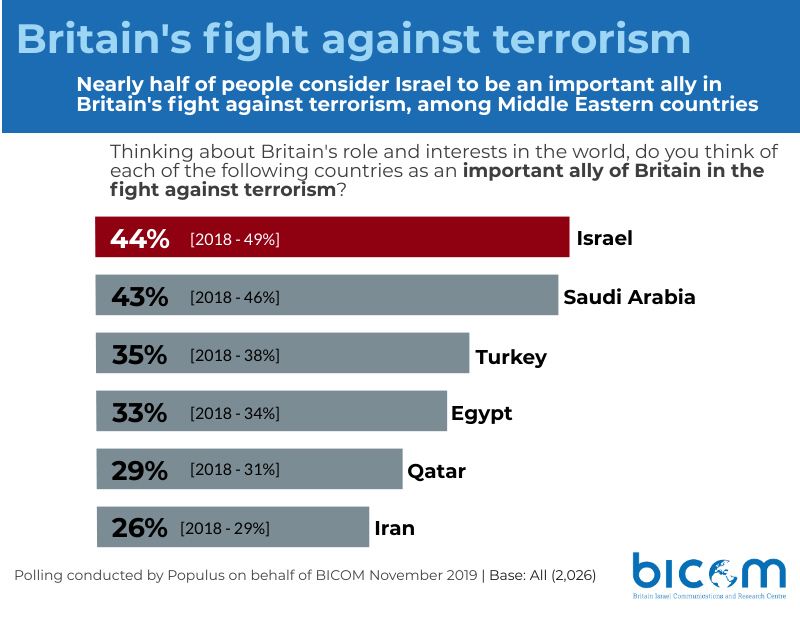 To measure opinion regarding a boycott of Israel we invite respondents to agree or disagree with the statement: “I don’t boycott goods or products from Israel and find it hard to understand why others would, given everything else that is going on in the world.”

The findings have been consistent for the past five years. Forty-six per cent of people agreed with the statement, so don’t support boycotts, 40 per cent don’t know. Fourteen per cent disagreed, so support a boycott of Israel in some way. Asked if ‘hating Israel and questioning its right to exist’ is antisemitic, 45 per cent of respondents agreed, 18 per cent disagreed and 36 per cent said they didn’t know. 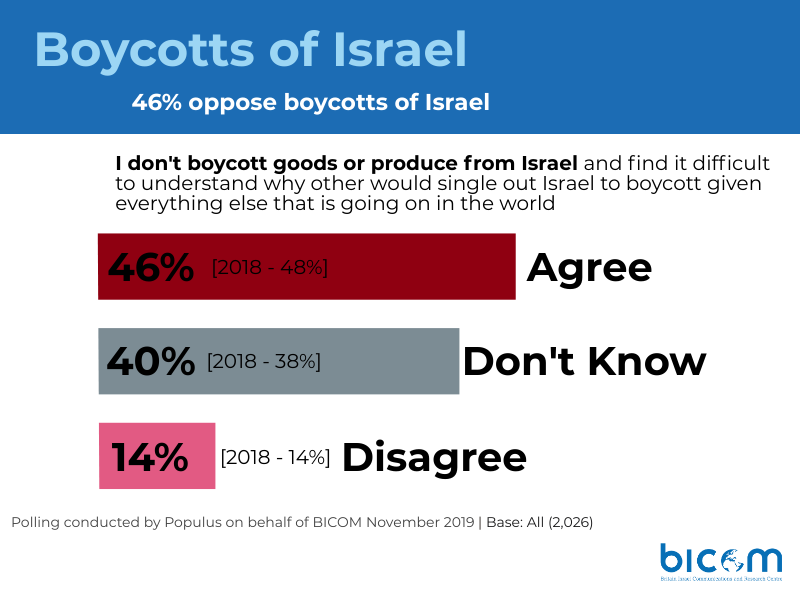 The importance of close defence and intelligence ties between Britain and Israel is acknowledged in the survey with 44 per cent of people saying Israel is an important partner for Britain in the fight against terrorism. Forty-eight per cent of people believe Saudi Arabia is Britain’s most important Middle East trading partner after Brexit, 37 per cent believe Qatar is important and 36 per cent Israel.

The really interesting, and alarming, trend in the survey only emerges when you cross reference the questions with the respondent’s party-political affiliation which is revealed by asking their voting intention. As you might expect the trend among those intending to vote Labour is stark. 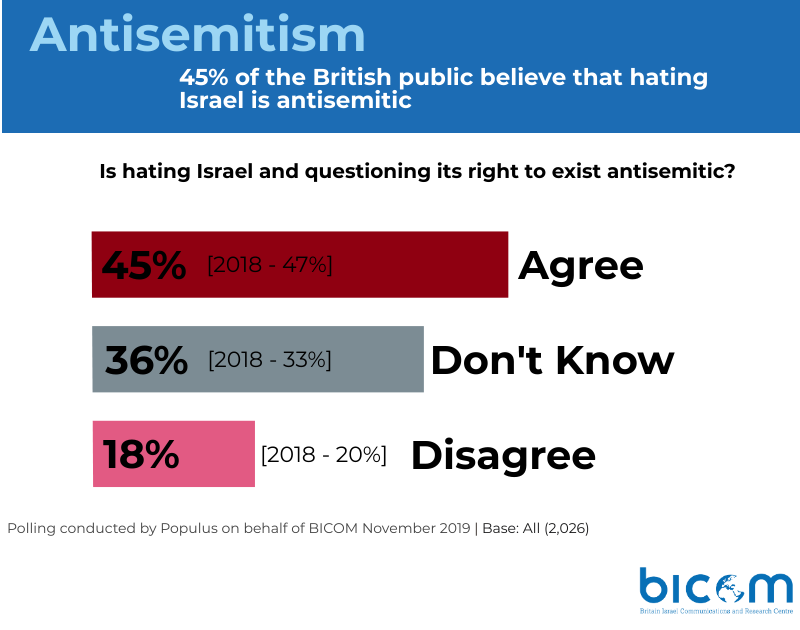 This is not necessarily evidence that 2014 Labour supporters have changed their views, it’s possible their party affiliation has changed, so we are talking about different sets of people. But what is crystal clear is that Labour supporters in 2019 are far less warm towards Israel, far warmer to the Palestinians and very significantly more supportive of a boycott of Israel.

Whether the Labour leader has persuaded supporters to adopt these views or has attracted new supporters who already had these views, is merely a matter of conjecture, it’s probably a mixture of both. But the poll gives us a very clear insight into the views of Labour supporters today on these issues which explains why Labour promises to recognise a Palestinian state, subject a trade deal with Israel to an ethical test and freeze arms sales to Israel have appeared in their party manifesto and play so well with Labour supporters.