“We, as a people who survived the greatest of atrocities and rose from the ashes to be a strong and secure nation, we will do all we can to continue to aid the survivors of the horrors in Syria. We know all too well how dangerous silence can be, and we cannot remain mute.”

“The days of Israel-bashing at the United Nations are over.”

(U.S. Ambassador to the UN Nikki Haley speaking at AIPAC’s annual policy conference in Washington, US, 28/03/2017)

“Britain, under the leadership of May, has made a concerted effort to make it clear that its December vote does not accurately reflect the British stance on the Israeli-Palestinian conflict. We welcome this change and encourage other western countries to join Britain in combating Israel’s unfair treatment at the UN.”

“Regarding the Gaza Strip, we must hold on to the formula of ‘rehabilitation for demilitarisation.’ Israel has an interest, as well as a moral commitment, to prevent deterioration toward a humanitarian crisis in Gaza around missing basic infrastructure.”

“Gaza appears to be a ‘black hole’, sucking in massive amounts of aid, with little known as to what happens once it arrives on the ground… the need for more safeguards and oversight on the work of aid groups in Gaza is clear and imperative.”

“I made it clear to President Putin our resolute opposition to the consolidation of Iran and its proxies in Syria. We see Iran trying to build a military force, military infrastructure, with the intention to be based in Syria, including the attempt by Iran to build a seaport. All this has serious implications in terms of Israel’s security.” 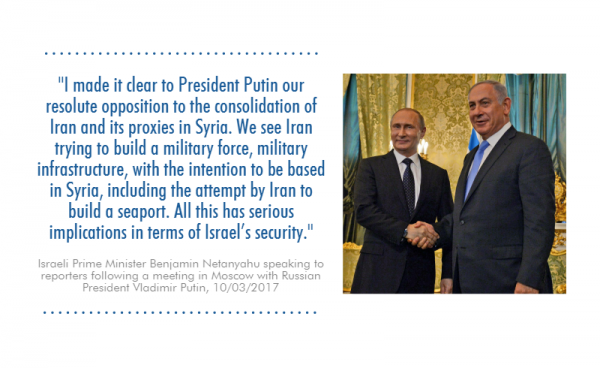