“A resolution that outlines [a] final status, that would not be appropriate…because the truth is this won’t get solved unless the Israeli people and Palestinian people want to solve it.”

(Outgoing US President Barack Obama speaking on Israeli-Palestinian peacebuilding during an interview with Channel Two, 10/01/2017) 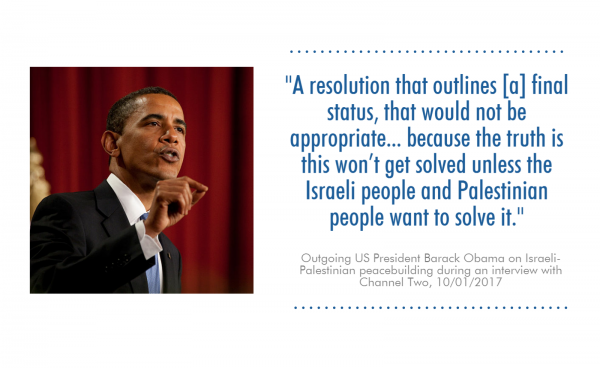 “There will be a need for a major effort in the coming years to reach an internal understanding among ourselves. We will need peace within us before we reach peace with our biggest enemies. At the same time, Abbas or his successors will have to make an effort to deal a serious blow to the opponents of peace on their side and bring about a national Palestinian agreement. Until then, we will probably have to live without peace.”

(Eitan Haber, Israeli journalist and publicist, writing in YNet on what is required for Israeli-Palestinian reconciliation, 07/01/2017) 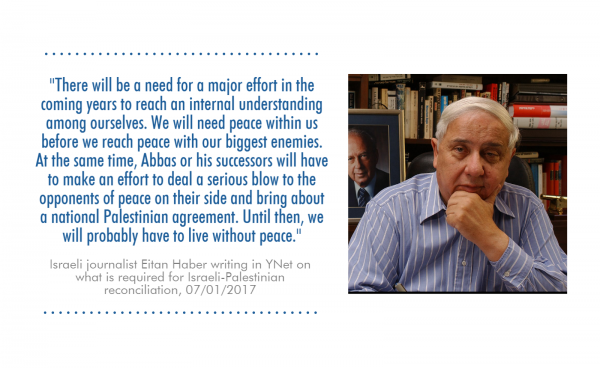 “The country should be disturbed by a situation in which the military bears the responsibility of upholding its values. It is the job of the leadership. But when there is a vacuum, it is fortunately filled with commanders such as Chief of Staff Gadi Eisenkot.” 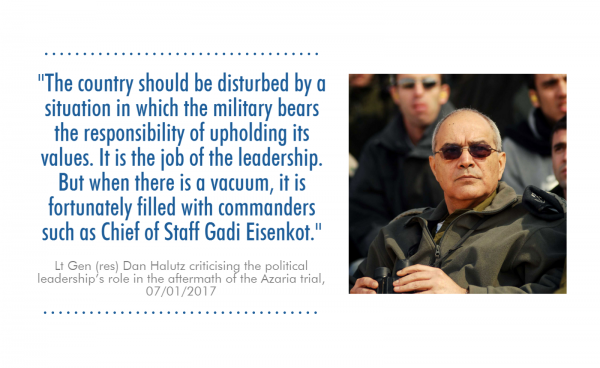 “The very fact that Azaria was tried, painstakingly tried in an unimpeachably credible Israeli court of law, represented reaffirmation of Israel’s determination to preserve its morality — its insistence on preventing our enemies, our terrorist foes, from reducing us to their cynical, murderous depths… Immediately pardoning Azaria, it should be obvious but apparently is not, would represent a mockery of that legal process, and of our vital, self-preserving values. It would imply a tolerance for the intolerable, corroding the open-fire orders and the entire framework that guides our troops in their work.” 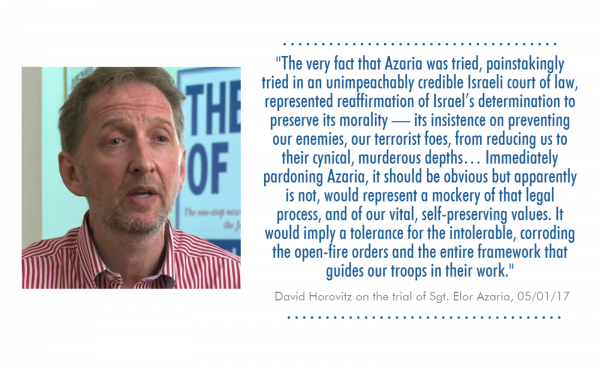 “I call on everyone to end the violence and stop the irresponsible statements coming from within the political system. It’s not the way of the Jewish people, of the State of Israel or of the IDF. The court has made its decision and now we also have a role; to prevent a rift in our society and to ensure no harm comes to the people’s army. The State of Israel is powerful because of our wonderful military, our officers and our soldiers and because we are a country of law.” 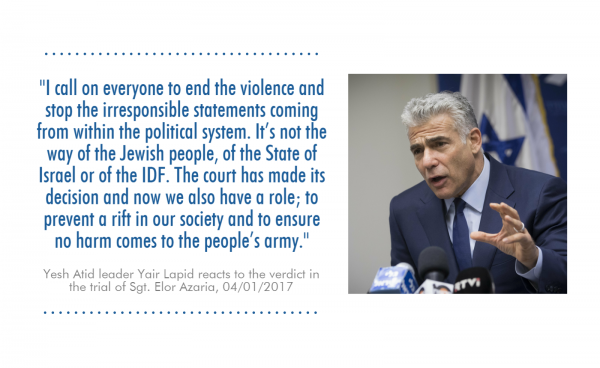 “There are several obvious differences between the Helmand Incident [in which an injured Taliban insurgent was killed in 2011] and the Elor Azaria affair…but there are also similarities: the tumultuous political and public debate, the mass mobilisation of civilians and soldiers on behalf of the accused, and the criticisms leveled at the judicial system. Surely the most important lesson to be learned from [Alexander] Blackman’s case, however, is that the legal process is being allowed to run its course. For the sake of Israel’s democracy, that must also be the outcome whether Azaria is acquitted or found guilty.”

(Prof Stuart Cohen and Prof Amichai Cohen on the importance of Israel’s legal system in disciplining its own soldiers, 02/01/2017) 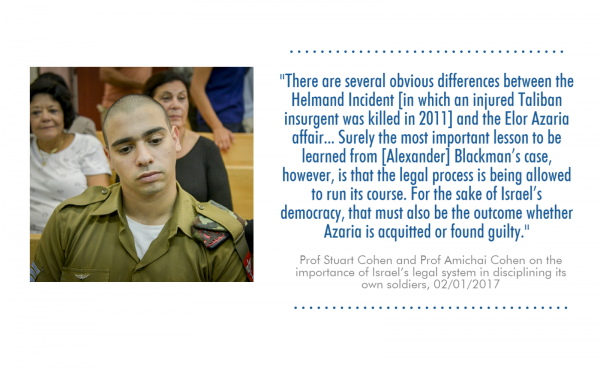