What happened: Following meetings with party representatives yesterday, President Reuven Rivlin has given Prime Minister Benjamin Netanyahu the mandate to try and form a new government.

Context: Although Netanyahu will now go first in trying to form a new government, he faces a difficult task as he is several seats short of a majority.

Looking forward: This afternoon the 24th Knesset will be sworn. For the first time since the outbreak of the coronavirus, guests with a green certificate be allowed to attend. 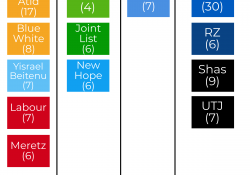