BICOM Senior Research Fellow Professor Alan Johnson appeared on the “Head to Head” programme on Al Jazeera on Friday 13th May. He joined former US Ambassador to Israel Martin Indyk and others to debate “Should the US be neutral on Israel-Palestine?”. He was joined on the panel by Ghada Karmi a Palestinian activist and research fellow at the University of Exeter’s Institute of Arab and Islamic Studies, who has authored the book Return: A Palestinian Memoir, and the journalist Rachel Shabi, who wrote Not the Enemy: Israel’s Jews from Arab Lands. The programme was presented by Al Jazeera’s Mehdi Hassan.

Click on the picture below to view the episode. 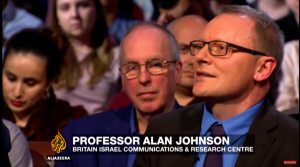