BICOM has produced a briefing outlining Israel’s concerns around Gaza, Hamas’s strategy in rebuilding the tunnels, the challenges Israel faces in detecting them, the debate in Israel around the issue of a pre-emptive strike on the tunnels and the Gaza reconstruction challenge.

Read the key points below and download the full briefing here.

• Concerns for renewed violence over the Israel-Gaza border have risen in recent weeks as evidence emerges of the extent of Hamas’s efforts to rebuild its attack tunnels.
• Israeli efforts to detect tunnels are also moving forward, adding an additional potential source of friction.
• The heightened concern comes in the context of major ongoing economic and humanitarian challenges placing considerable pressure on Hamas in Gaza, and Hamas’s efforts to fan the flames of violence in the West Bank. 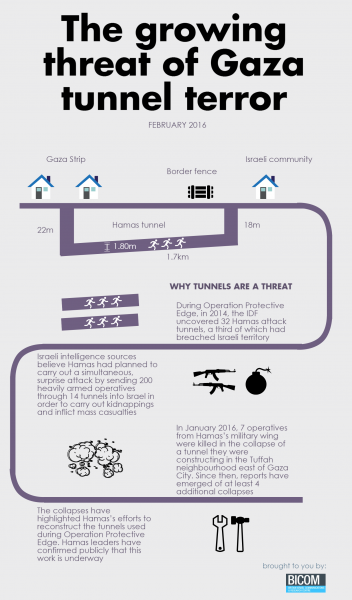