BICOM has released new research that shows how Hezbollah, proscribed by various international organisations as a terrorist group, is using the Syrian conflict to help prepare for a war with Israel.

Hezbollah in 2016: damaged goods or dangerous war machine? details how the armed, radical Lebanese group possess between 100,000 and 150,000 missiles, many of which are hidden amongst the civilian population of South Lebanon.

The radical group acts as a proxy for Iran, and entered the Syrian civil war with the aim of maintaining Bashar Al Assad’s regime, as well as creating a “state within a state in Syria” as an insurance policy to protect Iranian interests in case the regime were to fall.

Its fighters were also directly involved in combat operations in key battlefields, as well as the siege of Madaya, where a reported 40,000 Syrians have been struggling for food.

While Hezbollah is looking to avoid an all-out conflict with Israel, it already has a sophisticated military capability that poses serious policy problems for the country it describes as a “cancerous Zionist enemy”. It has threatened to strike cities and key strategic sites throughout Israel, including an ammonia factory in Haifa offshore gas fields, and Ben Gurion Airport. 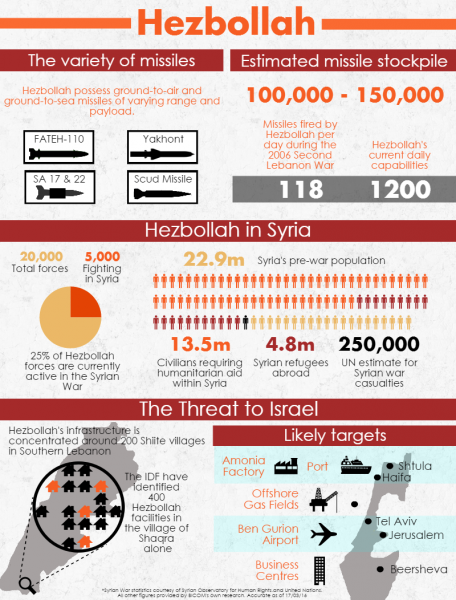