The current wave of terror, which has left 34 people (31 Israelis) dead and 407 injured, has now been going on for six months, since October 2015. As well as the 205 stabbing incidents there have been 83 shootings, and 42 car rammings.

BICOM has produced the following infographic which contains the latest data about terror attacks in Israel between the months of October 2015 and April 2016. The infographic data is based on BICOM research, cross checked with Israeli security sources. 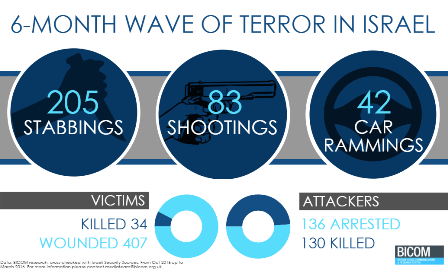